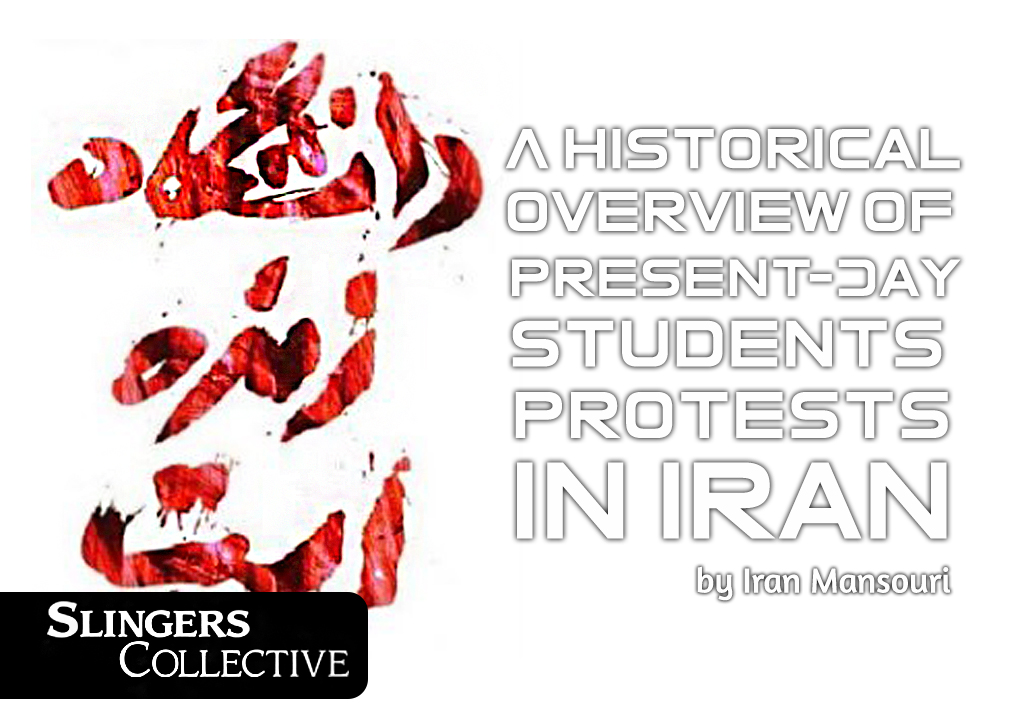 This article briefly revisits the history of student movements since the 1979 revolution in Iran. It points out the commonality shared between these movements, which is that all were heavily suppressed by the state. As a next step, the article zooms in on the current generation of student activists and their self-organization within student councils; the ways in which the councils link student activists to the body of students, and how they become instrumental in combining the demands of students with much broader demands coming from, although it is not a homogenous entity, the working class, and society at large.

In January 2018, Iran saw a wave of protests encompassing more than 120 cities and smaller towns in Iran. The widespread demonstrations began in Mashhad, a large city in the northeast of the country, where many, outraged by staggering inflation, began protesting against Rouhani’s government. Although Mashad is generally recognised as the epicentre of this wave, scattered demonstrations were already taking place in many cities against high unemployment and the lack of payment of wages and pensions in the past few months before this protest. Overall, protests in the country lasted approximately 10 days and were brutally suppressed. Around 26 people were shot dead in the streets, more than three thousand people were arrested, and numerous prisoners were murdered under torture inside prisons across the country.

After the Islamic revolution in 1979, universities had a key role in shaping the post-revolution intellectual space of society. Many leftist students were active various political organizations. After the cultural revolution in the universities and its accompanying bloody suppression of the left in general, the student movement was silent for a while. At the end of the 1990s and the turn of the millennium, the two generations born after the revolution have joined the student movement. During the first so-called reformist government since the revolution under president Mohammad Khatami, many progressive student papers and cultural centres were formed against the will of the government. Islamic associations, which had previously been the means of government repression inside universities, were dominated by opposition students or reformist government supporters. This was considered an enormous achievement for the student movement, as Iranian universities had seen dark years of silence and oppression.

Between 2002 and 2008, we observed a significant presence of the left at universities, which was again suppressed, with many activists being arrested and others forced to go into exile.

In 2011, another wave of leftist students slowly emerged at Iranian universities. What makes this generation’s activity distinctive from their predecessors was the combination of the demands of the student movement with much broader demands in society and more specifically the working class. These student protests generally began with immediate student concerns such as opposition to increasing tuition and dormitory fees, and imposition of restrictive laws for female students. The of educational spaces is just one example of a broader neoliberal project implemented by the Islamic republic, which was precisely described in the student statements at various stages of their protests. Left-wing orientation was proved by the presence of these students in the most recent uprising, and the introduction of progressive slogans including “Bread, Work, Freedom” and “Reformists, Conservatives, Your Story is Over” to the overall movement. Another progressive aspect of this wave of leftist students was the presence and leadership of women, proven by the large proportion of female arrestees. This feature actually reflects a long and proud tradition of women’s equal role in the Iranian left.

This new wave of leftist students founded student councils for pursuing their demands. Student councils in Iranian universities have more or less the same functionality as similar organizations across the world. The presence of students councils is a direct product of Rouhani’s “moderate” government. Previously, during another “reformist” government, that of Mohammad Khatami, the Islamic Republic had experienced a loss of control over universities. Numerous student strikes and riots in July 1999 and June 2003 were cases in point. Rouhani’s government learned from these previous experiences and put depoliticizing the university on its agenda. For instance, Student day1, like Workers’ day, turning into a state ceremony with the presence of the president and his supporters, devoid of any progressive actions by students. During this period, the Iranian student movement did not totally fade away. There were minor protests to preserve the light. In 2007, when Saffar Harandi, the former minister of guidance, gave a speech at Tabriz University, several students called for the freedom of political prisoners, the abolition of censorship and support for the struggles of the working class. “We returned” was the iconic banner held by the students on that day. Many of them, however, faced severe punishments including imprisonment and deprivation of education for their resistance on that day.

In such a situation, student councils were the only spaces for independent action outside of the governmental framework. Intensification of class conflicts across the society, including universities as well as the imposition of neoliberal policies, in fact, made student councils the only space to protect the rights of students. In December 2017, student councils in 32 different Iranian universities issued a common statement on Student Day. Many of those who signed this statement, arrested later on during the most recent events. This statement defends the right to free study and condemns the newly established Seniority Act. They also called on authorities not to entrust university premises to private businesses, and the return of all students who had been deprived of education including those excluded for activism around religious rights and those of ethnic minorities. The statement goes beyond the university walls and the so-called “moderate” policies of the Rouhani government like the suppression of labor organizations and destabilizing the workforces in crucial areas such as health and education. The statement strongly opposes the “Graduate Internship Plan” through which the private sectors plan to temporarily employ graduates with a monthly salary equivalent to $70. The incentive for the business is a two-year tax exemption and after the internship, the employer has no obligation to employ the intern. The statement described this plan as a kind of sweatshop labor which only contributes to a nominal reduction of the unemployment figure. The students called this plan illegitimate and anti-worker, as it also deprives other workers to access job opportunities.

Similar to the student councils, the Iranian unions have been very active, and have been under a lot of pressure from the government. For instance, several leaders of the movement have been sentenced to long imprisonments. In March 2016, student councils pointed out similar concerns as those of the teachers in a statement which the university localization policies and the lack of equal opportunity for quality education. As a case in point, the non-state schools and private specialized institutes for the university entrance exam are not accessible to the children of lower class families. In this way, only a certain class of society finds the opportunity to enter good quality education. The statement warned that the continuation of such policies will create irreversible cultural, political, social and security problems for the country. They call the government to abolish social exclusion, specifically in the deprived areas; to recognize the right to choose a place of study; the decentralization and of educational facilities. The results of such statements were that the government prevented some student councils holding elections and dissolved others outright. Needless to say, students at various universities were and told they were being deprived of education. This layer had cut their political teeth before the protests in January 2018.

The difference between these student struggles and the previous generation is that they have been fought through student councils rather than political currents and organizations. There are two important points to be made about this. First, student councils have more potential for connecting to life than political organizations. If a political organization is suppressed by the government, the corresponding student organization would, therefore, fall apart. On the contrary, the student councils are entangled with the basic issues in the daily life of students such as the privatization of education, gender segregation, disciplinary committees, the status of dormitories and nutrition at the university. Hence, the link between the student activists and the body of students cannot easily be broken. Second, the problems student councils tackle and the ways in which they shape their struggles conflict with the government’s policies. This conflict creates a natural relationship between the student movement and other movements in spite of all suppression and threats. The policy of the government is the same in all areas, and this causes all those who fall under these policies to be naturally linked. The joint actions of student and labor activists against the “Graduate Internship Plan”, as described above, is an important example of such collaborations. Finally, the government policy in higher education and education in general, similar to its other neoliberal policies, have intensified the class struggle upon the agenda of student councils. This is due to the fact that student councils, based on their very definition, must defend the interests of students against these policies. That is why activists of the student councils incline towards the left, as a result of very real, an objective struggle within a class conflict, and must eventually be armed with ideas of class struggle.

Water crisis and the Isfahan Uprising: Is self-management of water resources a solution?