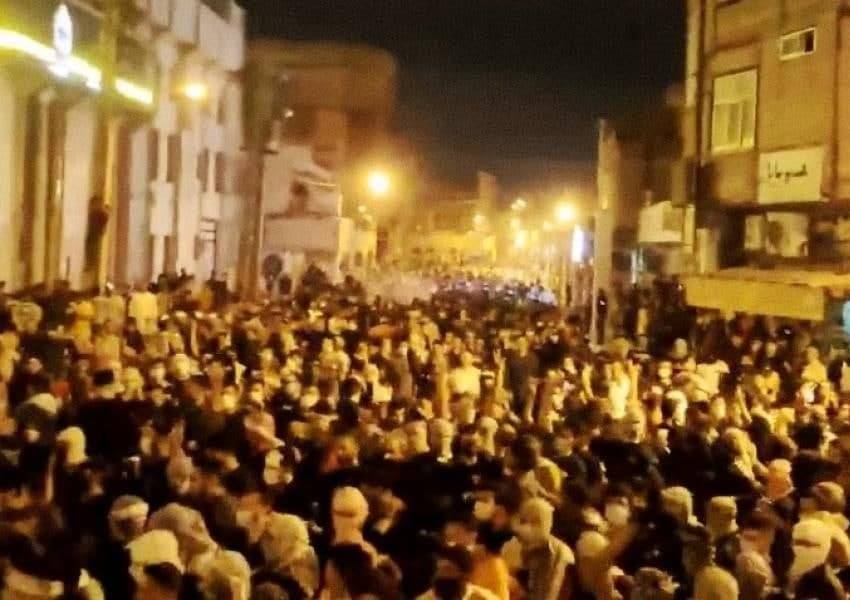 Only five months after the widespread uprising in Sistan and Baluchestan Province in southeast Iran, in protest over the killing of a fuel trader by border guards, much more pervasive protests have started in Khuzestan, in southwest Iran.  These protests started over severe water shortages in Khuzestan but historical reasons have widened the scope of it. Although there have been at least 12 people killed by security forces, the uprisings are still going on.

Bullets instead of water

Water crisis is not a new phenomenon in Iran and has manifested itself many times in the past decade. Authorities in Iran try to reduce the issue to a natural crisis caused by global climate changes but this explains only a small part of the water crisis in Iran. During the presidency of Ali Akbar Hashemi Rafsanjani (1989-1997) and the rise of capitalism to establish and consolidate its shaky power, the “dam-building movement” began in Iran as a result of the 1979 revolution and the eight-year war with Iraq. The dam had become a symbol of development and construction in government propaganda in Iran, and television often showed images of the opening of various dams by the then president, known as “the hero of construction”. Dam construction, however, was only one way of organising the technocratic and professional class that formed the material foundations of the new capitalism in Iran. Hundreds of contractors were established to participate in the construction of the dams, and the proceeds from the sale of oil and other public wealth were distributed among them. Like any other lucrative field in Iran, companies affiliated with the Ministry of Intelligence and later, companies affiliated with new military force, the Revolutionary Guards quickly entered this thriving new “industry.” As a result of this thoughtless dam construction, hectares of fertile farmland, dozens of villages, and several historic sites related to ancient Iran were submerged. The destruction was beginning while the propaganda machine of the Islamic Republic was naming the frequent dam construction as a symbol of “prosperity” and “progress”.

Irregular dams, which gradually caused a shortage of water along rivers and lakes, were supplemented by two other devastating problems. One of these issues was the bizarre plan to transfer water from flooded rivers to arid areas in an effort to support agriculture. In this way, the government of the Islamic Republic tried to heal the economic crisis, which was slowly manifesting itself as a result of its neoliberal policies, with temporary plans. The result of this catastrophic policy was not only a water crisis in areas that once had enough water, but also making thousands of farmers and ranchers who had built their lives on irrigated crops miserable. The second issue was the allocation of water to polluting industries along the water transfer route, which rapidly resulted in water contamination and eventually dried up many rivers. Many of the great rivers that flowed for centuries along certain paths, and several important lakes dried up and disappeared as a result of the predatory policies of the rulers of the Islamic Republic over three decades.

The dangers of being “Arab”

As a result of the British-backed coup on February 22, 1921, a new political figure emerged in Iranian politics. The name of this figure was Reza Pahlavi. He established the Pahlavi dynasty by replacing the Qajar dynasty in April 1926. Reza Pahlavi, known as Reza Shah, can be considered as the founder of the modern nation-state in Iran. The establishment of this nation-state, however, like almost any other nation-state, was only possible by the elimination of identities that undermined the unity of the “nation.”  Even before the beginning of his reign, Reza Pahlavi, as Minister of War and then Prime Minister of post-coup cabinets, on the one hand organized the suppression of liberation uprisings in the three northern provinces of Khorasan, Gilan and Azerbaijan to dissuade his British allies from anti-Bolshevik intervention. On the other hand, he either recruited or suppressed local feudal lords throughout Iran. These repressions were accompanied by the confiscation of lands and villages belonging to these lords which became his possessions after the establishment of the Pahlavi dynasty. This effectively made him the largest feudal lord in Iran.

In the beginning of the Pahlavi dynasty, Sheikh Khazal, a great Arab feudal lord in southern Iran, was assassinated since he resisted the idea of a unified central government as opposed to his local power. This assassination coincided with the rise of Reza Shah’s “Aryan shahr” ideology based on which all people in Iran are from the “Aryan race”. Therefore, Arabs living in Iran were not Iranians but the remnants of the Arabs who occupied Iran in the seventh century AD and exterminated the Sasanian dynasty. To strengthen this ideology, which was to serve the establishment of the Iranian nation-state, Reza Shah hired experts at a royal institution to compile a new history in the areas inhabited by non-Persian tribes. In the book “The Five Hundred Years History of Khuzestan”, one of these experts claims that the “Khuz” people of the Aryan race reside in Khuzestan, and the Arabs living there are either remnants of the invading Arabs in the seventh century AD, or are the “Khuz” who have accepted the Arabic language and culture, in other words are not considered Iranian. As a result, the bloody and horrific history of denying the existence of the Arabs in Iran and violating their rights continues to this day despite the 1979 revolution that led to the Islamic Republic.

The history of persistent repression has made being Arab a permanent security issue for the state, as Arab-populated areas have always been in political unrest. Thus, the logical continuation of Reza Shah’s ethnic cleansing plans has been pursued by the post-war governments of the Islamic Republic; to forcibly relocate the Arabs from their ancestral lands. These plans have been approved by the highest legal and security authorities of the Islamic Republic and have been ordered by the ministers of successive governments for implementation.

The land of workers’ resistance

Khuzestan was also the first place oil was discovered in Iran. For this reason, it has always been a place of conflict between the imperialist powers and the Iranian government as well as the Iranian government and the working class. The discovery of oil in Khuzestan and the influx of cheap labor into this province have caused many industries to be established in the region. While the Reza Shah government forced public servants and some Kurdish nomads to migrate – and even kidnapped people from the streets of Azerbaijan – to the northern provinces to supply the workers of newly established industries in those regions, people in deprived areas of central Iran, especially the Lor tribes and Bakhtiari nomads, went to the southern province of Khuzestan in search of work. In this way, along with the Arabs who traditionally lived in these lands, Lor-majority communities and cities were gradually formed. This was important not only in terms of population composition, but also in terms of the class composition of the region. Such populations have made this region one of the most proletarian regions of Iran, which has accumulated a brilliant history of workers’ resistance. From the formation of the first secret union of oil workers in 1927, which was able to organize a strike in April 1929 with 14 thousand workers, to the significant struggles of steel and sugarcane workers in recent years and the strikes of oil contract workers this year, the region has accumulated nearly a century of experience in industrial proletariat resistance.

Despite this history of resistance, large numbers of the Lor and Arab people living in this region are those who have been dragged into desolation and faced serious precarity in their daily lives because of decades of neoliberal policies by the Islamic Republic and the domination of capitalist exploitation.

In the last two weeks, street riots have broken out in more than 20 cities in the region. Some cities have fallen into the hands of the people for hours. People have blocked intercity roads and city streets by setting up fires. They have fought with empty hands and stones against thousands of armed soldiers sent to the area to quell the insurgency. While the government tried to keep the insurgency within the Arab regions, so they could emphasise the Arab identity of it and gain the support of other ethnicities who may feel threatened “by the danger of disintegration of Iran”, the spread of insurgency to nearby towns where most of the population is Lor and the chanting of “Lor and Arab Unite” turned it into the intersection of resistance. Then, demonstrations in support of the southern insurgency were held in the northernmost parts of Iran, home to the nationally oppressed Turks.

Twelve people have reportedly been killed by live ammunition during the uprising. Hundreds of people have been arrested and imprisoned in various insurgent cities. The internet and in some cases electricity has been cut off in these cities. At the time of writing, there is less news from these cities. Some speculate that the government was able to quell the insurgency by besieging cities and neighborhoods, at least temporarily. At the same time, however, hundreds of people are being interrogated and tortured in prisons in these areas.  The atmosphere in Khuzestan is inflamed and will remain inflamed until national oppression, and, of course, class oppression, is eliminated. This is an insurgent region, and insurgency will become the collective memory of people who do not want to and cannot live under oppression.

Dey Mah Protests in the year that elapsed: A class, factional, and political analysis of an ongoing crisis

The Iranian protests with Slingers Collective