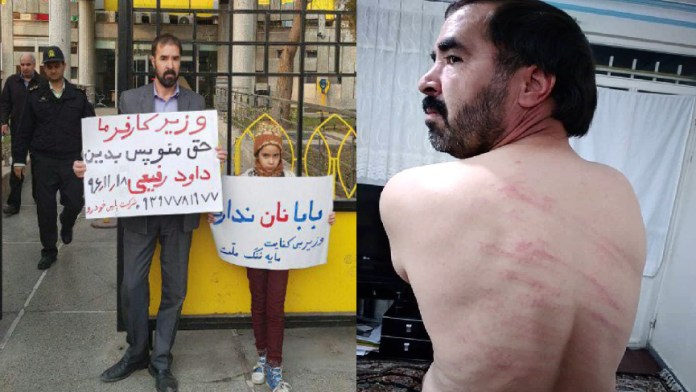 A worker from “Pars Khodro” car factory, Davud Rafiee, went to the Labour ministry to follow up on the processes regarding him getting illegally laid off in 2018. There he was offered 200 million Toman as a hush money. Having no demands other than being reinstated to his job, Davud started a demonstration in front of the ministry to expose this bribery attempt. He was quickly arrested by the police. He started a hunger strike in the so-called “Grand Prison of Tehran” and was released after 3 days, having to pay 50 million toman, until court hearings. But Davud refused to bow down to threats and went back to the ministry to protest with a small banner in his hands. After a complaint from the minister, this time he got sentenced to 74 lashes.

Iran is a prime example of the state backing capitalists by threatening and intimidating workers to suppress their protests against exploitation. When Davud went to the court on 26 November, he was immediately detained and the 74 lashings were executed immediately. Davud merely demanded to return to work. This incident did not attract any press attention. As he was protesting holding his banner with slogans against the US, Israel and the labour minister, he not only showed his political awareness as a worker but also demonstrated his awareness of the cooperation of the state with capitalists, and its enmity against workers. His punishment by whipping, a remnant from dark ages, was not only against him but also against the whole Iranian working class. Last fall the working class rose up against this oppression but the Islamic Republic responded by murdering hundreds of protesters in merely 72 hours.

Workers, comrades! You should know this: while Iran pretends to be friends with oppressed nations, within its borders it did not tolerate a single worker demonstration, even the ones with a single protester, and tries to silence workers using oppression and violance.

Dictating Rules from Below: The Re-Emergence of Workers’ Councils in Iran

The CCITTA Call for Strike in Response to Student Suppression