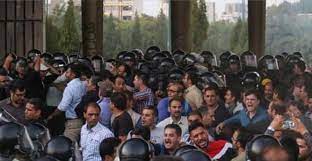 A collective statement of different Iranian syndicates and independent workers’, teachers’, pensioners’ and women’s associations for the Mayday

This year we are approaching Mayday while a global crisis of health has affected the lives of the workers.

The Global pandemic of Covid-19 as well as the economic crisis has impressed workers, waged laborers and small businesses. In Iran, due to the inability and insufficiency of both state and government this situation has been deteriorating than everywhere else.

The lack of sufficient health care policies, necessary quarantine plans and support for subsistence by the government has expanded the crisis of making a living for the poor. Although workers and laborers are demanding immediate, free and public vaccination, the powerful forces deliberately have been omitting the demand and seek to pursue the interests of a specific group of rulers via making crises. The insistence on the production of national vaccines and delivering the task of providing vaccines to the hands of private sectors have been done in this regard. This, in turn, has dragged increasing parts of the population, especially the middle-classes into the misery of poverty and has marginalized them. Meantime, the condition of women workers is the worst. According to the available figures, in the wake of an increasingwave of job losses and layoffs due to the pandemic, 70 percent of women workers have lost their jobs. With regard to the subsistence, this process of instability and systematic impoverishment of the waged laborers manifests itself mostly, and with the extreme discrimination, in the subsistence conditions of women workers who have the lowest right to employment and who are among the first groups to be fired. This, in turn, has isolated women and made another wound on the body of Iranian working class. Meanwhile, the condition of women domestic workers who have lost their earnings is the worst. Gender discrimination as well as unemployment and bankruptcy have imposed double pressures on this part of the labor force in Iran.

Notwithstanding, over the last year, the Iranian working class and its allies have pursued inexhaustible and durable struggle in a situation in which the balance of power has not been in favor of them and that worker activists and those of other social movements have been under systematic and multilayered oppression. Workers in different economic sectors ranging from petrochemical factories as well as Hepko, Azarab, Haft Tappeh, Khouzestan Steel Company and Syndicate of Tehran and Suburbs bus Company to the teachers, pensioners, university students and women have proceeded through their different struggles in varying forms against the violent neoliberal policies of the Iranian state. Among these struggles, the most notable is that of Haft Tappeh workers who have revealed the process of privatization, huge defalcation of the main stockholders of the company for the public and have insisted on the role of workers in the decision-makings and council management. These struggles have received solidarity across the country and the world through statements, campaigns by workers, syndicates and large trade unions.

Against these national and international solidarities, capitalist-oriented tendencies have suggested different sorts of plans and alternatives to escape the crisis. But Iranian workers have learned by their experiences that:

The concern of globally dominant powers has not ever been the protection of working classes and masses of laborers’ interests in any part of the world. The solution in Iran, as in other parts of the world, can only be achievedthrough class unity and solidarity among the workers themselves and their connection and collaboration with the struggles of other urban-rural laborers. By organizing and making their own independent lines, Iranian workers should not allow the non-worker forces to advance their deceitful plans in defense of capitalism which does not have anything to do with social justice and does not recognize the workers’ role in the administration of the society.

It is a fact that we as workers are highly dispersed in the current situation and this is an alert that despite the self-sacrifices and solidarity for struggle among the activists of social movements, whiteout a serious, organized and general collaboration among all workers and laborers we would not be able to oppose the anti-worker policies and to change the status quo.

We have learned through experiences that in the lack of independent organizations and shop stewards the question of determining the minimum wage has become a repetitive mockery. Given that the poverty line for an Iranian household living in metropoles should, at least, be 12 million Tomans (equal to 516 US dollar), the government did not take seriously the demands of even the state-backed syndicates.

Now, the lack of organizations within the workplaces or, in the regional and national levels is felt deeper than ever and it necessitates an inexhaustible struggle to form them. Without such coherent and mass organizations, the workers cannot articulate their struggles and the result would be vulnerable and minimum.

Under the current conditions, the formation of a council of collaboration among different sectors of workers, employees, teachers, pensioners, women, students and the unemployed is necessary than ever. This task is not a task among others, but it is the main link in organizing in the society among the workers and laborers. Without coordination and a move towards forming mass organizations to lead the demands of the movements collectively, the power of these brave demanding protests would be wasted and the oppressions would be rendered easier. An effort towards convergence among dispersed struggles and expanding solidarity in this year is an immediate critical necessity.

Strike action, the formation of free and independent worker’s associations is an undeniable right of Iranian workers!

The emancipation of the workers is only possible by themselves!

General Unity of Pensioners of Iran

Co-ordinating Committee for the Help to Form Worker’s Organizations

Committee for the Pursuit of Forming Worker’s Organizations

Dialogue Center for the Pensioners of Social Security

Revolutionary Youth of Marivan in Kurdistan Province, Iran — Announcement No.2

Statement of Afghan women in solidarity with women of Iran