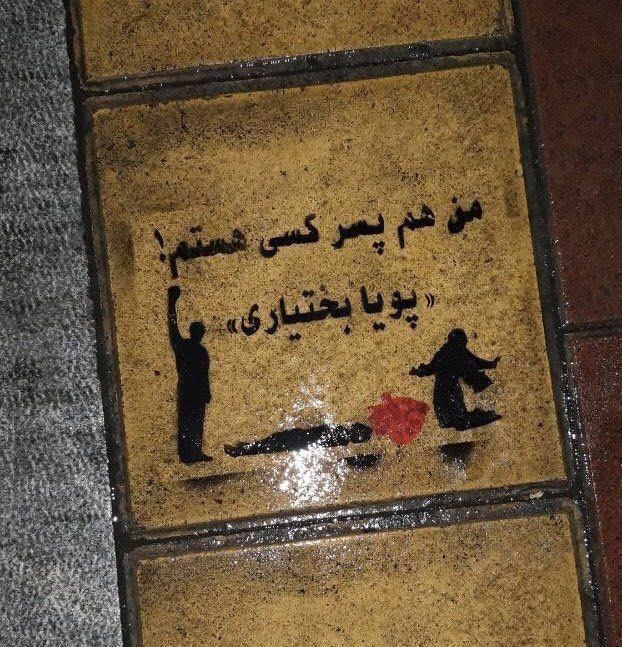 Mina Khanlarzadeh on pseudo anti-imperialism, the content of the petition, “Letter against US Imperialism” and the violence and silencing mechanisms of their discourse.

The US-led economic sanctions have caused a great deal of death and destruction in Iranian society, and the IMF policies in Iran, similar to other developing countries, have resulted in a widening of the class gap, poverty, severe marginalization of the peripheries, and a lowering of living standards. Yet, the US sanctions together with IMF policies do not result in a comprehensive understanding of the current situation in Iran. The anti-imperialist camp, in an attempt to highlight the global war against Iran, is focusing on external factors to the point of sacrificing historical-political analysis, thereby avoiding the particularities of Iran’s case by reducing it to transnational narratives.

The petition, “Letter Against US Imperialism”, on the recent protests in Iran, currently in circulation, is illustrative of this problem. It’s important to examine its foundational concerns, as they sound superficially similar to anti-imperialist progressive ideas. The petition completely disregards the particularities of the economic and political circumstances Iranians have been struggling against for many decades. Despite the petition’s old-fashioned claims of standing with “the oppressed of the world” whom they would like to unite, it ends up exonerating the IRI (Islamic Republic of Iran) from its corruption and politics of killing and impoverishment, and supporting the status quo until further notice. According to the petition, under current global circumstances the downfall of the IRI would lead to “catastrophic losses” for the Iranian people, and the regime replacing the current one would be “far more violent and destructive.” Who are these Iranian people that the petition is saving from catastrophic losses by protecting their status quo from any meaningful transformation? Surely not Nikta Esfandani, the 14-year-old girl murdered during the street protests, and her family and many others like them.

The petition tells us that the events in Iran are similar to the developments in the rest of the world: “We view the recent protests in Iran within this broader international context of resistance.” Neoliberalism has turned into a magical term that is supposed to explain the sources of political discontent from Latin America to Asia and Africa without any attention paid to the political structures and sociohistorical specificities of each of these contexts. It is true that impoverishment, the deregulation of social services, and the commodification of education and health are among the common sources of discontent among protesters in different parts of the world. But neoliberalism is a vague term that oftentimes conceals more than it uncovers the real issues, demands, and experiences in each case. The economic decisions towards neoliberalization do not fully explicate the ways politics work in each of these contexts, the sources of discontent in the society. Thus, the path towards future societies freed from those sources of discontent are not the same. Unfortunately, obsessing over neoliberalism leads to “catastrophic losses” in understanding the social context of the street protests in Iran. This picture features three mothers (Akram Neghabi, Hoorieh Farajzadeh, and Nahid Shirpisheh) whose sons were murdered in street protests of the years 1999 (Said Zeinali), 2009 (Shahram Farajzadeh), and 2019 (Pooya Bakhtiari). The image gives the most precise political lesson and historicizes the current situation. In 1999, students protested against the closure of a newspaper attempting to push for reformist measures. In 2009, when protestors demanded electoral justice hoping to create a space for reform from within the government through the presidency of Mirhossein Mousavi, that hope was violently shut down. The recent street protests have been demanding radical political transformations. The stories of these mothers and the dreams and hopes of their dear ones can by no means be fully explained by referencing neoliberalism, the US-led sanctions against Iran, and IMF policies.

Direct Your Screams towards the US

Since its very inception, the Iranian government has leveled blame on outside forces for its domestic shortcomings. Unfortunately, the petition reminds us of the famous Ayatollah Khomeini quote, “All the anger you have accumulated in your throat must be screamed at the US.”

The petition claims “[…] the United States’ imperial sanctions regime has opened the space for neoliberal economic institutions such as the IMF to facilitate the ravaging of the Iranian economy.” Even if we assume that the authors of the petition have the inside knowledge of the Iranian policy makers decisions and the economic structure they would implement, the very recent elimination of subsidies have been repeatedly implemented from the presidency of Rafsanjani (1989-1997) onward.

If the budget deficit caused by the sanctions inevitably leads the IRI towards cutting social services or increasing petrol prices, the petition must still address: (1) why the IRI did not reform its tax policy towards the rich and the state-sponsored foundations, marred in corruption, which are  exempted from paying taxes. (2) why the IRI has not restricted its regional military and security spending, (3) why nuclear activities have become an essential part of the Iranian government’s initiatives, while there has been no democratic space for Iranians to voice their opinion on any of these issues, or (4) how can the Iranian government justify the eight-day internet shutdown at a cost of $61 million per day, which exceeded the gains from petrol price hike?

The Simple World of Good Stability vs. Bad Transformation

The petition defines two entities, but it is not clear whether they are considered to be the same or different. One is the entire spectrum of the ialamic republic’s opposition, which it terms native informants, and the other is the functionaries who support the US-led sanctions. “This project is not without its Iranian native informants and cheerleaders, who serve as functionaries of U.S. imperialism.  […] Such functionaries are supported in their cause by Iranian native informants, so-called intellectuals.” The petition’s overly simple pictures contains only the economic sanctions and its supporters, as native informants and functionaries, who want to transform the political structure in Iran. They are apparently the only forces that demand meaningful, but catastrophic change in Iran. And of course, according to the petition, neoliberalism is to be blamed in toto for the shortcomings of the IRI that connects Iran to, for instance, Iraq, Lebanon, and South America.

According to this narrative, the IRI has no choice but to follow policies dictated by economic imperialism, and that the people of Iran who demand stability in politics and economy in order to avoid becoming another Syria or Afghanistan are decent people. Therefore, demanding stability is a positive attribute and desired by decent people, and the petitioners stand with the demands for reform by protesters who also desire stability. But the petition does not address the fate of reforms, given that Mirhossein Mousavi the 2009 president-elect as its last hope, has been under house arrest for nearly a decade, and the current president, Rouhani, as Mousavi’s counterfeit substitute, has completely failed to address the most basic demands for reform.

More importantly, if Mousavi’s house arrest is metaphorically where the reforms stand today, then the petition must explain why it associates reform with stability.  But in reality by casting those who demand meaningful reforms as native informants and functionaries of American imperialism, the protestors who are demanding real change are consequently guilty of belonging to these groups. Ironically, the petition’s position is even harsher than several Iranian government officials who, unlike their typical attitude in the past, have avoided dismissing protesters as agents of American imperialism. But to not sound completely against Iran’s streets, the petition identifies stability as the true demand of protesters.

What Do Iranian People Want?

The petition pretends to know what Iranian people want: “The majority of the Iranian people do not seek regime change because they have already lived through two monumental events that destabilized their lives […]  Iranians seek economic and political stability, […]. We stand by them and their calls for domestic reform [….]” The petition claims Iranians want stability, but who are these Iranians who want stability? It’s certainly not the protesters who shouted for the fall of the dictator (Ayatollah Khamenei) in the streets and actually destabilized the country by forcing the government to use maximum force to silence them and to the surprise of the petitioners, kill more than 200 of them. The violent politics of stability has, in fact, been employed by the government to silence any cry for transformation towards improvement.

The petitioners must explain how they arrived at the demand for stability from the images and videos coming out of Iran, and on what basis can they represent the needs and demands of the protesters if it is not based on the stories told by protesters themselves in their actions and words. Can Iranians want anything other than stability? The petition does not even attempt to understand what has happened in Iran. Instead, it puts words into the mouth of Iranians, and dictates them their desires; it is infantilizing and even civilizing. But how do the petitioners know better than those putting their lives on the line, daring to think, speak and act in ways that challenges the status quo?

The petitioners address themselves “as people in the United States.” It seems that due to their proximity to “the center of power” they are assuming they must know everything, including what Iranians desire or need. The petition makes it seem that there is no need for examining the specificities, since the protests in Iran are read as the same as those in the rest of the third world, with the only additional factor of the US-led sanctions against the country.

Contrary to the analysis of the petition, the news, images and specifically the slogans used by the protesters which are now finally pouring out of Iran paint a clear picture of their demands: “With our coward politicians none of our issues will be resolved…. Respond to us you villains… come out of your nests, you politician pimps.”

Instead of telling the protestors that in fact what they want is stability, the least we can do is to listen to them. Their story is a complex one. It is a far cry from the tale of the “complex West” and the “similar rest” that is repeatedly told.

Iran from December to August – Part one: Aspects of an Uprising

Neither voting nor boycotting: a break from electoral policies