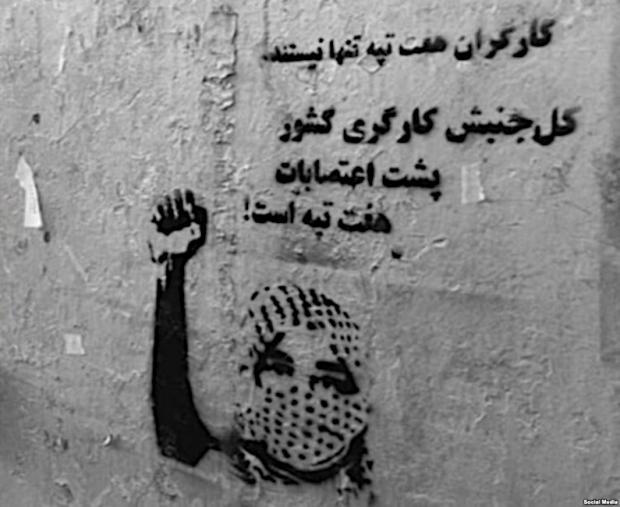 On the Saturday of May 7, 2021, Haft Tapeh workers declared a victory:

“Haft Tapeh has been liberated by its workers.”

In this sense, “liberation” implies that one of the long-time demands of the workers, who have long been subject to lay-offs, oppression, punishment, and even torture, is met. This liberation means that the company is no longer in the hands of “corrupt magnates like Omid Asadbeigi.”

To better understand the 5-year long protests and organizations of Haft Tapeh workers, we will pose and answer the following questions:

1.     Does it mean the end of the fight for workers now that the company is nationalized?

2.     Why does the Iranian jurisdiction try to usurp the hard-fought victory of the workers, presenting the result as its blessing instead?

3.     What is the real alternative for workers? What does the path towards workers’ control look like?

Since 2007 the Haft Tapeh workers protested the unpaid wages, lay-offs, and legal obstacles to unionization and the socialization of the company, the right to an independent union, and workers committees in the workplace.

The strikes organized by Haft Tapeh workers are among the longest-lasting ones in the history of the Iranian worker’s movement. The state responded with permanent lay-offs, the arrest and torture of Ismail Bakhshi and other leading figures, and many more threats to the striking workers.

The streets of Shousha were filled with slogans of “We are all Bakhshi” at the time when Ismail Bakhshi and Sepideh Kalyan (an independent journalist partaking in the demonstrations) were forced to sign documents of “confession” under torture. Intelligence agents then handed over these fake confessions to the state television and radio organization to be broadcasted. But these attempts to suppress the workers failed, as the demonstrators added the release of Bakhshi and Kalyan to their list of demands and continued the protests.

With Ebrahim Reisi, responsible for the infamous massacre of political prisoners back in 1987, heading the jurisdiction, the PR efforts of the regime entered a new era. Leading the jurisdiction with his bloody hands, his courts initially sentenced the workers to years in prison and then commuted or annulled these decisions, thinking this would sway the workers to his side. But these hypocritical actions did not lessen the impacts of arrests, torture, and oppression, and the workers’ legitimate demands were not pulled back.

The Islamic Republic used tactics of oppression to deter the Haft Tapeh workers. Since the October of 2019, when thousands of workers took to the streets for demonstrations, the state intelligence has been trying to infiltrate these demonstrations, spreading rumors about the danger of these protests and not returning to the factories. These tactics were also employed in other strikes in the past. The vigilance of the workers kept such actions from being successful. Those who tried to reduce the strikes to “after work protests, without work stoppages” failed in their attempts. Then Ismail Bakhshi shouted, “our alternative is workers councils,” which necessitates;

1.     Honest reflection on the failures of the attempts to create independent workers organizations

2.     The need to attain better control of the workflow, to organize more effective work stoppages to more effectively campaign for the reinstatement of the laid-off workers

3.     Taking back the factory from corrupt managers and the private sectors

The slogan of “no to the privatization of Haft Tapeh” is more than a simple economic demand. Article 44 of the Iranian constitution that calls for “profit making” and opens the way to the expansion of privatizations, as emphasized by the religious leader Ali Khamanei himself, is an assault on workers’ rights and job security. The workers are fighting to reverse this trend.

Haft Tapeh workers attained one of their demands, but this is just the first step. The experience with the nationalization of the Hepco company showed how the change of hands from the private sector to the government did not change the material conditions of the workers very much. Thus the workers are determined to keep fighting for their demands of an independent union and workplace councils.