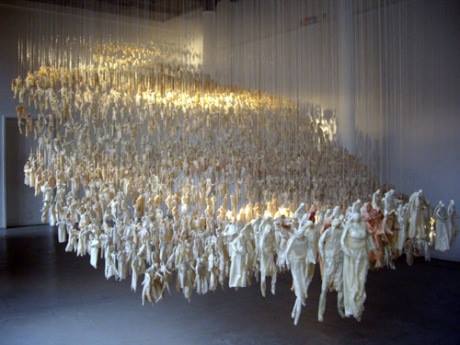 The aim of this article is not to give sophisticated definitions of collective memory and archive. We leave that to those who have chosen memory studies as their field of research and devote themselves to the more academic analysis of these concepts. It is more a plea to all those who reject the ways in which their history has been narrated, to produce. It is only through the production of text, art – be it performative art or poetry – art of every kind, and other forms of expression, that those who have been denied a voice by the political powers that govern over them n form individual and collective responses to the dominant narratives that aim to silence them.

The executions of political prisoners that started six months after the revolution of 1979 in Iran and the mass executions of 1988/89, represent such silenced historical events. One tool for those who have survived and the descendants of the dead to oppose this silence is the memorialization and collective singing of freedom songs that constitute an inheritance of the imprisoned and murdered guerilla fighters and other dissidents. The songs are traces to a neglected past in which children were obliged to lie in school about the cause of death of their mothers and fathers, in which the dissidents’ bodies have been abandoned in mass graves without designation, in which their farewell letters and other written records about their time in prison remain untouchable taboo texts of “Kafers”, and their commemoration ceremonies declared forbidden gathering that can end in imprisonment and interrogation of participants. Through the repression of these historical events, their processing is rendered impossible. Mourning and healing do not materialize, not only because the parties responsible are still in power, but also because the event cannot be remembered and memorialized in the way in whitch the people affected desire it. What remains is a painful melancholia that revitalizes every time another political prisoner is executed. Death has translated into fossilized evidences of political control and the determined attempt at preserving one’s own memory. The memorialization of the freedom songs is the materialization of this unprocessible past and melancholy.

The words of an El Salvadorian guerilla fighter ring in my ears when he explains in Tatiana Huezo Sanchez’s documentary film The Tiniest Place (El Lugar Mas Pequenio), that after the mass killings of communists, he continues to live in two scenes at the same time. He might be at the dinner table with his family and at the same time relive a scene in which he is talking to his murdered comrades. He explains that he lives in these two worlds all the time, but that it does not irritate him, because it is an accepted part of his life. The man’s memory has turned into an archive of the civil war, the killings and the resistance movement. This archive is inaccessible until the moment of it being narrated in Sanchez’s documentary film. To many people affected by the executions of political prisoners in Iran, may it be that they lost friends or family members or are former prisoners who survived, life in these parallel worlds is part of their everyday. A friend once said that even one’s calculation of time is shaped by the immediate experience of loss. “I left Iran, three years after Reza was executed”; “We married two years before Maheen’s execution”; “The whole family went mountain climbing one year before Farshid and Farzin were executed”; and so on. The parallel worlds and the mutated time counting can be seen as tokens of absence, tokens of a repressed memory and thus of a repressed archive. Jacques Derrida’s discussion of archive is inevitable, even for those who want to formulate a concise understanding of archive in order to use it in their own discussions. The in my view most important sentence in his only work that he fully dedicated to the question of archive, Archive Fever, states: “There is no political power without the control of the archive, if not of memory.” If we can come to this conscious understanding of the role of political powers in controlling our memory, we can begin to think of ways for providing access to our own repressed archives. The fact that dominant discourses aim at our collective memory does not mean that archives that contradict the dominant narrative do not exist. They surely do, but they are inaccessible, boxed into dusty repositories, may it be our memories that we carry around or little suitcases in which we keep forbidden documents like letters, photographs, newspaper articles etc. Through publishing their prison memoirs, some have already started this process of providing access to how we narrate our own history. It is through the formulation and creation of platforms, collectives, circles, and networks that deal with this very specific task of providing access to our repressed archives, that serious counter-narratives can be formed.

Proof of a significant existing potential in this regard are the reactions of hundreds of people who were shocked to find themselves confronted with the release of a cover of one of the above mentioned freedom songs by a Tehran-based pop band. The band released the cover song of River (Rūd) two days before presidential elections in Iran, as a way to promote their favorite candidate Hassan Rouhani. Referring to the lyrics of the song, they advocated for participating in the elections and voting for Rohani.
The lyrics read as follows:

The pop-band released the cover song touting that “Let us conjoin like waves and laugh at the sorcery of the night. We have covered this old song in your honor and for our common aim. We won’t move backwards. We will participate in the elections and vote for Rohani.” Most interestingly, the description presents their new release as the cover of “an old song”. That’s it. No reference to the Iranian People’s Fedai Guerillas whose song they had covered, nor to the oppression and mass killing of their members, nor to Saeed Soltanpour, the very poet who had wrote the song and who had been arrested in the middle of his wedding ceremony in 1981 to then be executed by the Iranian government two months later. The band had sung the song of the murdered for the murderer. This does not mean that the band is deliberately taking part in the systematic repression of archive. But it means that their action is part of a discursive condition in which the erasure of the origin of the song and its reuse as an ode to the president of the very political system that is responsible for the killings, is possible.

As much as the cover song was a shock and initiator of reliving the historical trauma related to it, as much did the reaction of hundreds of people show that there exists a kind of collective common sense about the repression of memory and propagation of dominant narratives. It also means that this crowd of individuals bear the potential of forming organized responses and counter-narratives. The amount of criticism and resistance to the song (the band recalled the song and removed it from all platforms after this wave of criticism) shows that the people who opposed it act on a collective memory that has been denied a voice and is ready to free itself from its encirclement.

There is one thing that we need to keep in mind: The control of archive by political powers does not merely aim at our collective memory. The story does not end here. The control of archive and memory aims at our future. By determining the content and spread of archival documents and through it our memorialization of history, dominant discourses shape the way we imagine our future and therefore, configure our future. Through the organized forming of counter-narratives, we intervene in this process. At the end it is us who should laugh at the sorcery of the night and merge with the blueness of the river. This is our history.

A big step in the Haft Tapeh workers’ struggles