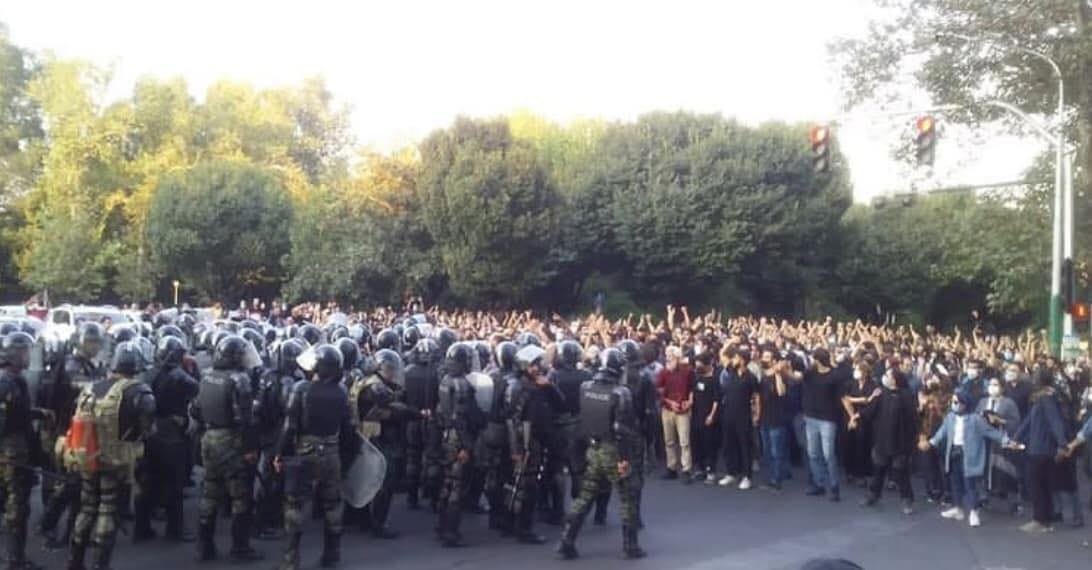 Mahsa’s murder sparked public anger across the country on Friday evening. Those who gathered in front of the hospital were stopped by the security forces. The Iranian regime, which is hostile to women and freedom, tried to prevent the protests. The shadow of the 44-year-old Iranian oppressive regime has surrounded the society. This regime has directed its anger and brutality towards women more than anyone else and has ensured its own survival only through the plunder and exploitation of society. Thus, killing women and people is not just negligence or a mistake by the Iranian regime which should end with the abolition of the Moral Police patrols, but rather the most important element of the regime’s survival. Precisely for this reason, as public protests develop, the day of the final encounter approaches.

As a part of the Iranian working class, we have always lived under the pressure of this regime and its collaborators. That’s why we workers are and will always be on the side of women in their freedom struggle against this swamp and anti-human order. We appeal to all workers of the country:

Those working in major industry and manufacturing, petrochemical, steel, and automotive sectors! It is in your hands to put an end to this hellish order created for us and in which we lose our beloved day in, day out. Society and people now look to your hands who will stop this hell by ceasing the production wheels. Overcoming this order would primarily be due to the union of workers and laborers with other emancipatory social movements. And that requires a final encounter with the existing order.

The despicable murder of 22-year-old Mahsa Amini by the morality police in Tehran caused public outrage. Misogyny and violence against women through reactionary sharia rules is actually nothing but controlling women. Methods ranging from discrimination and exploitation of women to harassment, threats, and dismissal in the workplace have located women in a more subordinate position.

The exacerbation of this situation has made women more determined than ever before in their struggle for emancipation and reclaiming their usurped rights. So much so that the combative stance of women in their social movements, especially in the struggles of workers, teachers, and retirees has deeply frightened the Iranian regime. The spread of solidarity networks and joint action plans shows the way for surpassing this hellish order.

Mahsa is our daughter, a member of our family, and Mahsas are many. Therefore, we must not allow such murders again. Those responsible for this murder should be put on trial immediately and the government should be held accountable. Moral Police patrols, this repression device, and mandatory veiling should be abolished immediately. All women who are in prison for rejecting this order should be released. While the Protest Organizing Committee of Subcontracted Oil Workers stands by Mahsa’s family, we call on all workers of this sector to show solidarity.

No one should remain silent about such murders. We must stand against this situation and protest it out loud.

Syndicate of Workers of Tehran and Suburbs Bus Company (Vahed)

We condemn the murder of Mahsa Amini and the oppression and persecution of women.

The freedom of expression, of the selection of the way of dressing, and the right to education, employment, divorce, and participation in social activities are the rights of all people in the country including women, men, and every social group. The systematic and brutal violations of women’s rights have brought about general hatred of the oppressors. The structural, institutional, patriarchal discrimination against women and girls should be ended.

The Iranian labor movement and independent workers’ organizations are advocates of gender equality and oppose all forms of compulsory veiling, injustice, and discrimination against women and the oppressed. As workers, laborers, and the disenfranchised, who make up the absolute majority of the country, we must loudly protest this oppression. We seek justice for Mahsa (Jina) and others who are victims of this misogynistic, discriminatory and murderous system.

As Vahed Syndicate, we condemn Mahsa’s despicable murder again and share our sincere regrets with Mahsa’s family. We stand with the righteous anger and protests of the people of Saqqiz and the whole country.

The emancipation of the working-class is through organization and unity!