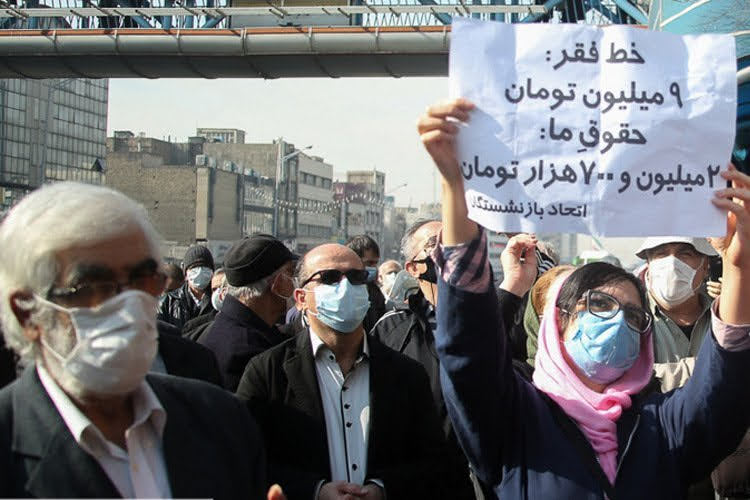 Retirees in Iran have organised 9 nationwide rallies since the beginning of the year, in addition to many other spontaneous protests in different cities. These include former oil company employees, retired teachers, municipal workers, and from various other sectors of the economy.  The new round of pensioner’s struggles is important from several perspectives for understanding the current political situation in Iran.

For the past year, restrictions put in place by the Islamic Republic to deal with the coronavirus pandemic has forced protest movements into retreat. These include the continuous closure of universities, leading to a stagnation in student union struggles; administrative turmoil in school education which led to the loss of organisation among teachers; the enactment of various anti-labour laws without the opportunity for the working class to protest, and widespread layoffs under the pretext of the pandemic emergency, and while street protests are forbidden. Retirees’ recent rallies, nine of which were held simultaneously in many cities, have reopened the streets to protest movements.

One of the main slogans of retirees highlights that it is only on the street where we can achieve our goals, and this can be realised only by getting back to street protests, encouraging others to do the same, and not allowing the emergency situation caused by the coronavirus outbreak to disrupt social ties anymore. In fact, they have been battling not only with material conditions which diminished the possibility of street rallies over the past year dramatically, but also with propaganda and exaggeration of the dangers caused by the virus outbreak, in which any street rally was implicitly equated with an increased number of people infected by the virus. It is in fact a sad irony that these conditions are broken by those who are the most vulnerable to the coronavirus and at risk of dying because of their age and health issues.

The pensioner’s movement is important from another perspective as well, as it is a place where protests by workers and retired employees of various sectors of production and services, whose relationship with each other is carefully monitored and prosecuted by security agencies before retirement, are joined together. The security agencies have long had a special sensitivity to the connection of various social movements with each other. During the repression of all kinds of social movements in Iran, on or off the streets, many are detained who according to the security agencies, have nothing to do with the movement and, according to their perceptions and preferences, should not be present at the gathering or relations. For example, in the case of Haft Tapeh Sugar Company during the crackdown on a series of protests by workers at the factory in December 2018, five of the eight main defendants in the Iranian capital were students or youths who provided information about Haft Tapeh workers’ struggles. The “crime” of these five people was so important to the security officials and the judiciary that they were tried along with the chairman of the board of directors of the factory workers’ union, and two members of the Haft Tappeh Workers’ Assembly including the chairman, in Tehran. The other defendants were seven workers who were members of the Assembly, whose trial was held at a local court in the small town of Shush in the south of Iran, where the Haft Tappeh factory is located. During the recent rally of retirees held in front of the Iranian Parliament, only a month after the one on January 10, which was, three members of the Tehran and Suburbs Bus Company union’s leadership were summoned to the security police (one of several security agencies), to be interrogated and charged for their participation in this gathering. Also at the March 8 rally that year, which was violently suppressed with some protestors detained, the only person kept in custody for more than a week was a student earning a living through freelance journalism.

However, the security forces’ awareness of the danger posed by solidarity has not meant they can stop it breaking out.  The summoned members of the committee of Syndicate of Workers of Tehran and Suburbs Bus Company, in defense of their gathering with the retirees, claim that they too are enrolled in the pension scheme of the social security department, thus consider themselves in the category of retired workers as well and in solidarity with the retirees. The retirement movement is where workers and employees of various manufacturing and service sectors come together after retirement as well as after dismissal due to union activity within it. Since every worker eventually retires, this makes for a big movement and one where workers from every trade stand in solidarity with each other. This feature has made the retiree’s movement one of the strongholds of protest movements in Iran.

One government concession to the retirees is to prioritise their children’s employment. This quickly proved popular with a small group among them. Prior to 2017, this priority was only given to the children of veterans who were injured, or lost close family, in the Iran-Iraq war. Since 2017 the extreme economic hardship endured by Iranians led to numerous widespread protests taking place throughout the country. As a result, the government attempted to satisfy the pensioners by extending the prioritised employment law. In practice this did not have any major impact on the living condition of retirees, as no necessary subsequent laws required for this extension to be implemented were passed. This extension, in fact, achieved the opposite result the Islamic Republic aimed for. More retirees became dissatisfied with the government, as the delayed and low wages continued to be the case. This extension was an example of how the charity policy of the Islamic Republic has failed, and actually boosted the collective struggle of the retirees.

Another advantage of the pensioners’ movement is that it has two national organizations. Although differing in detail, the two often act in concert in union struggles and, with separate but simultaneous calls, play a key role in organizing protest rallies. The “Pensioner’s Alliance of Iran”, relatively larger and more inclusive, and the “Iranian Pensioners’ Council”, have of course been the target of repression including arrest of their members in recent years.

Several members of the Pensioners’ Alliance of Iran, including Alieh Eghdamdoust, Ismail Gerami, and Hossein Gholami, have been arrested multiple times and their cases are pending in court. Alieh is a teacher who was fired in 1980 and imprisoned first from 1983 to 1989 for supporting a left-wing political organization opposed to the regime, then for three years from January 2009 for participating in a rally defending the rights of women prisoners, and most recently was sentenced to nine months in prison and seventy-four lashes in September 2018 for participating in a teachers’ protest rally in May of the same year; a sentence that has not yet been carried out yet. Shapour Ehsani Raad, a fired worker from the Profile Factory in Saveh, a small working-class town near the capital, and a member of the Iranian Pensioners’ Council, has been serving a six-year prison sentence since June 2020, two years of which must be spent in the province of Sistan and Baluchestan in a kind of internal exile.

These two organizations may have few members due to all kinds of constant repressions, summonses and persecution of their known members by the judiciary and the police, but their role in organizing and holding recent rallies shows they are trusted by their base, the retirees, not only in Tehran, but also in many other cities. They have been able to organize nine protest rallies in just ten weeks. Perhaps that is why the Islamic Republic, while spreading propaganda about pensions being increased, a promise repeated many times in recent years but never fulfilled, has pursued the policy of repression and crackdown on the pensioners. During a rally in front of the Ministry of Labor and Social Welfare on March 8, 2021, the day after the rally in front of the Iranian parliament, police and plainclothes forces affiliated with intelligence agencies attacked a gathering of pensioners. At least four participants in the rally were detained. Eyewitnesses testified that the detainees were severely beaten.

Earlier, during a nationwide rally of pensioners in the city of Tabriz on January 26, police used violence and beat the protesters. Although most detainees were released on March 8 within a few hours of the violent end of the rally and only Kamyar Fakoor, a freelance journalist, was detained for more than a week, recent crackdowns show that the Islamic Republic has the serious intent to suppress the pensioners’ movement.  The Iranian government has realized its significance and responds to it in its own brutal way. The retirement movement, however, has no intention of backing down. Despite the suppression of the March 8 rally, just days later, on March 14, as Iranians prepared to celebrate the solar New Year, retirees held their tenth nationwide rally in various cities. In Tehran, they demonstrated in front of the Ministry of Labor and Social Welfare, exactly the same place they had been severely repressed a few days back.

On the importance of the Iranian oil workers’ strike

Dey Mah Protests in the year that elapsed: A class, factional, and political analysis of an ongoing crisis