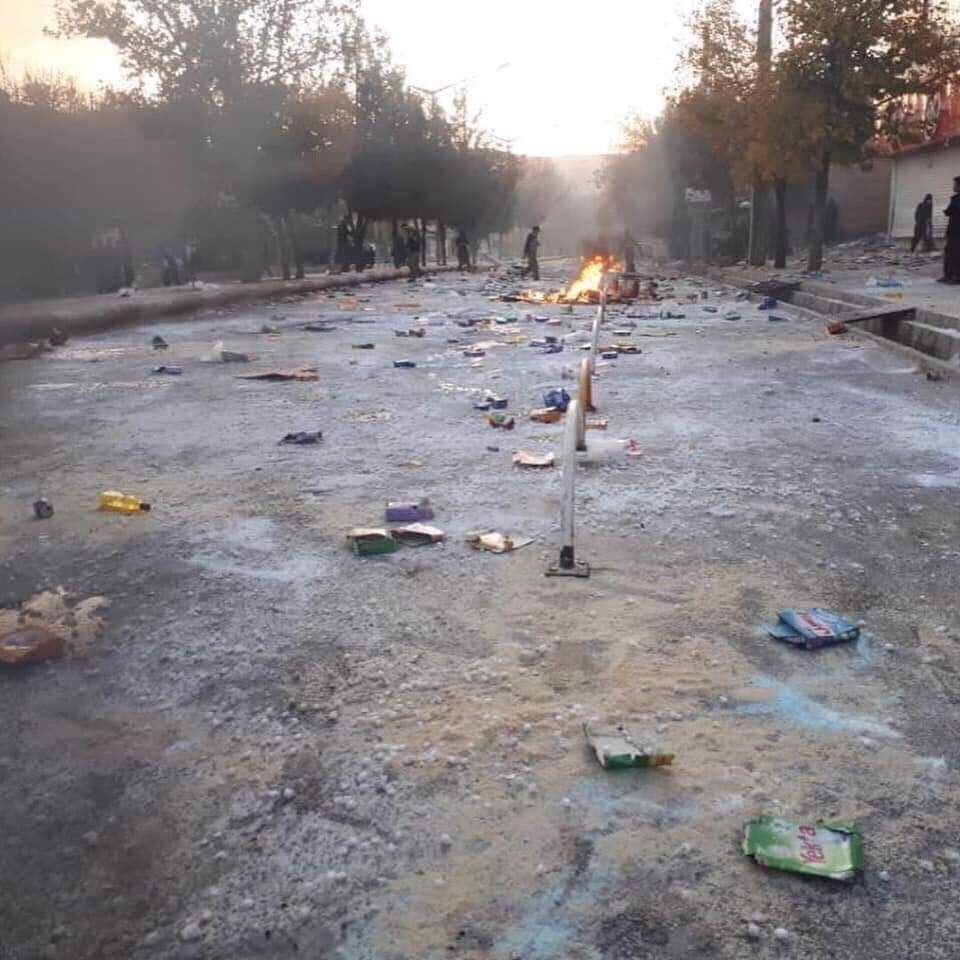 Editor’s Note:  Below we publish the translation of excerpts from a statement issued by a committee of revolutionary socialists inside Iran. This committee was named after Javad Nazari Fathabadi, one of the first protesting youth shot in the head by Iranian security forces on November 16 at the start of the latest popular uprising. This statement was originally published in Farsi by our Farsi section. http://manjanigh.de/wp-content/uploads/2019/11/falakhan150.pdf

by the Javad Nazari Fathabadi Committee

There are several reasons for calling the current events in Iran an uprising:

1.     The people’s confrontation with the regime has taken the offensive: setting up street barricades, attacking anti-riot guards, killing more agents of the repressive apparatus, attacking security cameras around town, many instances of attacks against police stations and government centers.

2.     Since the December 2017 uprising, Tehran has no longer been the center of popular political struggles in Iran. Tehran is no longer the center of developments in popular politics. Resistance need not take place in the haven of the ruling establishment (the capital city). During the past three years, at least three lasting centers of revolt appeared: Ahvaz, Isfahan, Kurdistan-Kermanshah.

3.     During the November 2019 uprising, the ruling establishment quickly revealed fear and submission in four ways:

a) The immediate response by [Ayatollah] Ali Khamenei during the course of his lecture on jurisprudence, the day after the battle began. It was aimed at preventing the continuation of divisions within the ruling establishment reflected in the parliament’s claiming that it “did not have any knowledge” [of the rise in the price of petroleum], and the criticisms expressed by some authorities. It was also aimed at permitting the suppression of the protests as soon as possible.

b) Immediately cutting off nationwide internet access and not reducing bandwidth or filtering websites.

c) Calling the popular struggles “foreign led turmoil” and emphasizing “the need for continuing the suppression”.

d) Immediately starting to shoot at the crowds.

4.     The concomitance of the popular protests in Iran with the uprising of the people of Iraq and the struggles of people in Lebanon, i.e. two areas where Iran has been visibly involved in pseudo-imperialist intervention and suppression of the people.

Yes, slogans such as “Reza Shah, Bless His Soul” or “neither Gaza, nor Lebanon, I will give my life for Iran” or “Iranian Republic” were heard and will probably be heard again. But how shall we interpret them and confront them correctly?

·       These slogans partly emanate from the support given by sectors of the middle class who are the target audience of the right-wing opposition media. During the November uprising however, these slogans were only heard in Mashhad and Tehran. The ethnic subjectivity in mainly Kurdish areas and among ethnic Arabs and Azaris of Iran does not make them susceptible to “Aryan Love Ideology” which is an example of Pan-Iranism.

·       But for most people present in the struggle, their material existence is such that if the  nature of the right-wing ideologies supporting their struggles is exposed (for example support for privatization and continuing the neoliberal tactics of capitalism), an understanding  of the contradiction between these ideas and their living conditions will lead them to change their minds and stop listening to these right-wing groups.

·       For various reasons (excusable and inexcusable), we have not been able to create organizations and media on par with right-wing propaganda establishments in addressing people effectively. This lack cannot be overcome overnight or for instance through spreading class and Marxist consciousness among the masses in the very moment of street protests.

As we reach the end of this cycle of protests, we need to prevent despair and not limit ourselves to emphasizing the scale of the repression through reporting the number of those arrested or killed. We need to “draw meaning” out of these protests as “one step forward” toward “victory”. We need to draw the manifestations of our revolutionary ideology out of these narratives and persistently expose contradictions embedded in right-wing narratives.

Discussing and promoting our ideas is critically important in this period. People in the streets have gone beyond the stage of “needing a consciousness that would arouse them to revolt against the current relations”. This can be partially seen in debates on “tactics for street battles”. We have seen amazing initiative on the part of the people. What needs repeating is the move toward creating “local-ethnic-labor-women’s associations” to preserve solidarity, intensify anger, learn from previous struggles and shorten the gaps between cycles of protests.

We need to view ourselves as living in a war zone. The fact is that we have been living in a war zone since the December 2017 uprising. However, since the November 2019 uprising its dimensions have become more visible. We need to create committees that could find each other in the course of the battle, in the time of attrition, reconstruction and future offensives and create links.

From the War Zone

Solidarity with the workers of Haft Tapeh!