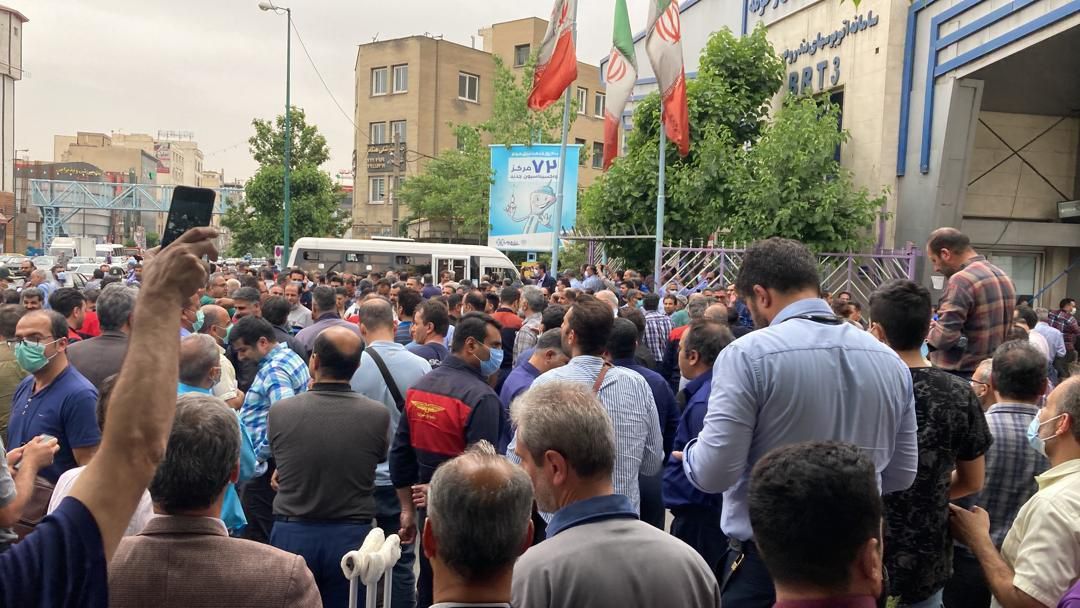 In this article which is originally published on Cosmonaut, Kaveh DadKhah calls for solidarity with the current wave of proletarian struggles in Iran.

In the memory of Omid Soltani, the first martyr of the current protests

Today the Iranian proletariat is again in revolt. Increasing austerity measures have reached a boiling point with the end of the flour subsidy. This has led to a thirteenfold increase in the prices of bread and other wheat-based products which was accompanied by similar increases in other foodstuffs and followed an earlier cutting of all subsidies on medicine. When the comprador bourgeoisie takes even bread out of the mouths of workers and their families, it will not go unanswered.

As in 2019 and 2021, the uprising began in the southern province of Khuzestan, home to a large Arab minority that has been leading the fight against the Islamic Republic (IR) on many fronts. It is home also to some of Iran’s most prominent labor unions (Haft Tappeh, Steel, Oil) and the vanguard of most protests against the government in the past few years, as well as championing the rights of national minorities within Iran. At first, the IR tried to limit the growth of the protests by mobilizing all its repressive forces around and within the cities where the protests began and cutting or significantly disrupting the internet connection. This failed to stop the spread of the protests. Now, the protests are ongoing almost all over the country. The IR started shooting the protesters, leading to the first martyrdom of the current protests: a 21-year-old young man named Omid Soltani, killed on the street by riot police.

The repression has reached obscene heights. The IRGC has encircled the city of Junqan in the southwest of Iran and is shooting down protesters as if they were a foreign army.1 The situation is similar in much of the southwestern provinces of Iran the majority of whose populations are under severe ethnic, economic, and political oppression even worse than what is experienced in the Persian heartland. We have been facing severe water shortages, massive unemployment, and an increasingly desolate natural environment because of the economic and climate policies of the Islamic Republic, whose policymakers merely reflect the interests of the Iranian comprador bourgeoisie. Because of this situation, no matter how many times the repressive forces massacre our people, our needs demand that we revolt again and again to defend the very basic necessities of our lives.

Alongside this, the teachers’ movement–the largest Iranian labor movement–is at its strongest. Side-by-side with the other protesters, it is working to advance working-class interests against the fascist state despite the severe repression. The most prominent labor unions (from Haft Tappeh to the bus drivers to the retirees of the Social Welfare Ministry and more) have published a joint statement in support of the protest. The Bus drivers of Tehran were the vanguard of the spread of the protests to the capital and many sections of workers in the public sector have supported them. In short, class consciousness is slowly re-emerging within Iranian society.

Among intellectuals, Marxist circles are multiplying despite the vigilance of the IR to eliminate as much of the left as it possibly can from academia (except for the pro IR strand that it tries to use as a method to neutralize the movement). Many underground radical circles publish theoretical works, engage in agitation, and help organize labor and popularize radical politics which has led to many advances in the labor movement in the past years. Journals such as Naghd and Political Economy Critique, offer novel perspectives through original works of theory and analysis and offer Iranian labor the experiences and ideas of the international communist movement through thousands of pages of translated texts every year. At the same time groups like Komite Sazmandehi e Amal e Kargari and The Slingers Collective, connect directly to workers in various industries, help them with organizing and learning about tactics they could use to achieve their aims, and publish summaries of their experiences and analysis of the conditions they witness in Persian and English, all while at risk of abduction, torture, or even death at the hands of the fascist Islamic Republic.

On the same front against the Islamic Republic, advocates for the rights of national minorities, feminists, and LGBT activists have been spreading awareness of the realities of ethnic oppression and discrimination, patriarchy, and cis- and heteronormativity. Iran’s peripheral provinces and the peripheries of major cities house millions of unemployed or unstably employed populations that in the truest manifestation of the phrase, “have nothing to lose but their chains.” Women in Iran have been facing an increasingly hostile reactionary current from the government that has taken away most means of contraception available (most notably stopping distribution of condoms in rural and nomad regions and heavily restricting access to them everywhere else in the nation) while outlawing abortion in any form. This is even worse than the prior conditions that merely allowed for abortion within very strictly enforced limited circumstances that weren’t available to the vast majority of women. The treatment of LGBT individuals within Iran remains the same as it has been for many decades. Unlike what some in the Western Left believe, Iran is no trans haven. The IR not only does not provide any subsidies for hormone therapy, it severely restricts access to it and gender-affirming surgeries through an arduous bureaucratic process that entails months and sometimes years of conversion “therapy” and harassment of the trans person who seeks these medical treatments. This is in addition to the harassment by Islamic moral police and reactionaries everywhere in their life. Yet this is merely one aspect of the harassment faced by LGBT people in Iran, a fuller exploration of which requires a separate piece.

What has been the answer of the mainstream opposition? “Do not call this the revolt of the hungry!” The pro-west, right-wing opposition–which possesses the entire non-government media apparatus–seeks to hide the unmistakably working-class nature of this movement! For the Iranian right-wing opposition, there are no issues with the economic imperative of the Islamic Republic and its neoliberal policies–they only want to be the ones implementing it and benefiting from it. Indeed, they sometimes argue that the IR is communist, for it does not follow neoliberal imperatives ruthlessly enough! The Iranian right-wing opposition boycotts the struggles of the Iranian proletariat in cases in which it cannot be co-opted. It also cooperates with the pro IR right by focused efforts towards delegitimizing any organization of the working class that is self-generated and not controlled by them. These include recent efforts against unions, such as efforts to characterize the teachers’ movement as “legal opposition”, a blatant lie seeing the reality of their severe suppression, and the arrest of tens of pro-union teachers. Another instance of this is covering militant protesters heavily negatively while repeatedly making pleas to the repressive forces of the Islamic Republic to switch sides to the right-wing opposition while they gun down hundreds and thousands of working-class protesters.

What do these developments, and the inability of the Iranian right (of both its pro-IR and anti-IR factions) to provide any solutions to them, mean for the left in Iran and our comrades internationally?

For us in Iran, it calls for a new theoretical, organizational, and agitational framework to be constructed that corresponds to the material, psychological, and ideological conditions we find ourselves in. Now, more than ever, merely relying on our classics and applying them as if they were a panacea, is a recipe for yet another disaster. The experience of the defeated revolution of 1979 taught us this, and we must never forget what followed. The experience of the Arab Spring shows us the necessity of a theoretically novel, organizationally efficient, and compelling new left. Otherwise, we will again lose the working class to the right, who will continue to worsen workers’ lives and sour them on all kinds of ‘revolt.’ The seeds of this political creativity have already been planted. Many underground Marxist organizations have emerged in the past few years whose creativity in the organization of labor both in classic and unstable neoliberal working conditions under fascist repression has led to great advancement of Iranian workers’ self-organization. These days this can be most clearly seen in the bus drivers’ strike in Tehran which has disrupted the capital and finally sparked the expansion of protests of Tehran. They have declined an offer from the government for a 40 percent increase in wages in exchange for stopping their strike, in order to support the protests.

This was in response to the arrest of Reza Shahabi, a sociologist who helped organize the union on charges of “connections to foreign organizations”, i.e., with radical unions and parties of other nations. This internationalism dominates the Iranian labor movement despite the overwhelming propaganda by the Iranian right of both pro and anti-IR varieties to create hostility towards neighboring nations. This move has been successful due to the elimination of much of the left, but it is now being pushed back against. Solidarity between different sections of the Iranian working class and their willingness to be internationalists amid an established atmosphere of chauvinism shows us the way forward. The left’s imperative is to provide the theoretical and historical knowledge and alternative media apparatus based on which this internationalism and class consciousness can grow.

For our comrades around the world, it means that anti-sanction and anti-war activism alone is not enough. The Iranian proletariat is merely one of many in the third world which have shown great revolutionary potential. As many have before, I propose that the main way for the advancement of the international communist movement is redevelopment of theoretical and organizational bonds as we saw in the Internationals of the past. The left is today more fragmented than ever. In the West, since the events of May ‘68, much of the left intelligentsia has completely moved to the realm of abstraction and academic work, inaccessible to the vast majority of society, straying the left towards the politically castrated fetish of political identity without material application.4 On the other hand, the old left, clinging to the stagnant Soviet Union, failed to respond to the radical changes brought about through the neoliberal restructuring of society and to attract progressive movements of its time to its side. The only way past this is to renew political mergers: between academia and radical political organization; the radical movements of all nations; and most importantly of all, between the left and the working class. Today, Iran is taking its turn in the dialogue. For a long time now, Iran–like much of the third world–has been merely listening. Now it’s speaking up. Our hope is that our comrades all around the world will listen and support us:

In hope of a revived unity between radicals of all nations fighting for a just world.