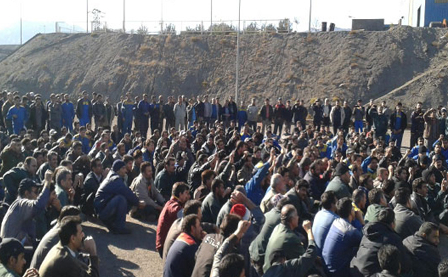 Iron ore mine of Chadormalu

In this series of articles, we aim at providing an overview of the history of miners’ struggles in Iran. This chapter focuses on the Chadormalu mine.

The mine at Chadormalu, one of the largest in Iran extracting iron, along with the related processing factories, the pelletizing complex of Ardekan and the steel factory of Arfa, directly and indirectly, employ nearly 48,000 people in Yazd province. Another 3000 also work in the extraction and loading section of the mine. Similar to other mining businesses, Chadormalu follows the management model in which the macro-management of large mines and subsidiaries are in the hands of a parent holding company that outsources the operation of various parts of the mine to different contractors. In this case, the most important contractors include Asphalt Tous Co. (custodian of mine extraction and the steel factory operations), Bahavand-raad Contractor Co. (the mine’s dump trucks and drivers), Haatami Contractor Co., and Arfa Steel and Iron Co. (custodian of the steel factory operations). Each contractor company has its own workers and machineries.

In December 2013, following the firing of an Asphalt Tous workers’ representative, who had pursued a 10 percent wage increase and the implementation of the job classification plan, a series of protests occurred to prevent the dismissal of the representative. Initially, 800 workers rallied in protest at the dismissal. The department of labor of Yazd province promised to help the return of workers’ representatives to work, and as a result, the workers ended their rally. When his dismissal was in fact upheld, two thousand workers across all shifts stopped working. According to article 27 of the labor law, dismissal of a worker is contingent upon the agreement of the enterprise’s trade union. The condition has not been observed in the case of Chadormalu, hence the dismissal was considered an illegal act by the employer. Nonetheless, the striking workers faced the force of security agents. In a reversal of the roles of plaintiff and accused, 28 workers were summoned to the court and arrested as the result of a lawsuit by Chadormalu’s managing director. The judiciary’s speaker spoke of legal action against “worker protests disturbing the public order” as well! Even though the arrested workers were released in the same month because of the continuance of protests by others, prosecution and harassment of workers by the capitalists and the judiciary system did not end. During the next year, while 25 of those arrested were acquitted, 5 others received pending decrees of imprisonment and flogging. As the secretary of the guild of Chadormalu mine workers stated: “One of the reasons these 5 people were convicted was their identification by the employer as the leaders of the workers’ protests in the past year. The employer wanted serious legal actions against them from the beginning to intimidate the other workers.”

The importance of the Chadormalu workers’ rally was that they rose up for the rights of their representative and, despite the arrest of some, were not intimidated, but stayed in their position to achieve their goals. Even though workers did not reach all their goals and returned to work with the authorities’ promises about following up their demands, the rally showed their united spirit.

The workers’ struggles in Chadormalu have not stopped since then. The guild elections of Chadormalu workers has always seen the participation of the majority of workers. The guild has always talked about “no collusion of workers with contractors” and the “necessity of workers’ organization.” Based on these foundations, the workers of Haatami Contractor Co. and Bahavand-raad Contractor Co. established their guilds in the winter of 2018 and January 2020, respectively. The Haatami workers’ guild held rallies protesting wage payment delays and non-payment of work-years benefits in the summer of 2018 as well as January 2020. The rallies have more-or-less accomplished some of the workers’ demands. Bahavand-raad Contractor workers, inspired by their fellow workers at other companies, were about to establish their guild, but faced the capitalist’s strike. The employer, using the excuse of lack of capital but with the goal of dissolving the workers’ guild, shut off the extraction operations in one of Iran’s largest mines and fired all 300 drivers of the company. The workers held rallies in January 2020 protesting the decision. With the restarting of company operations, some of the workers were called back, but workers demanded the return of all their colleagues, and continued their rallies to accomplish this goal. The fight has led to the employer’s promise to bring back all the workers.