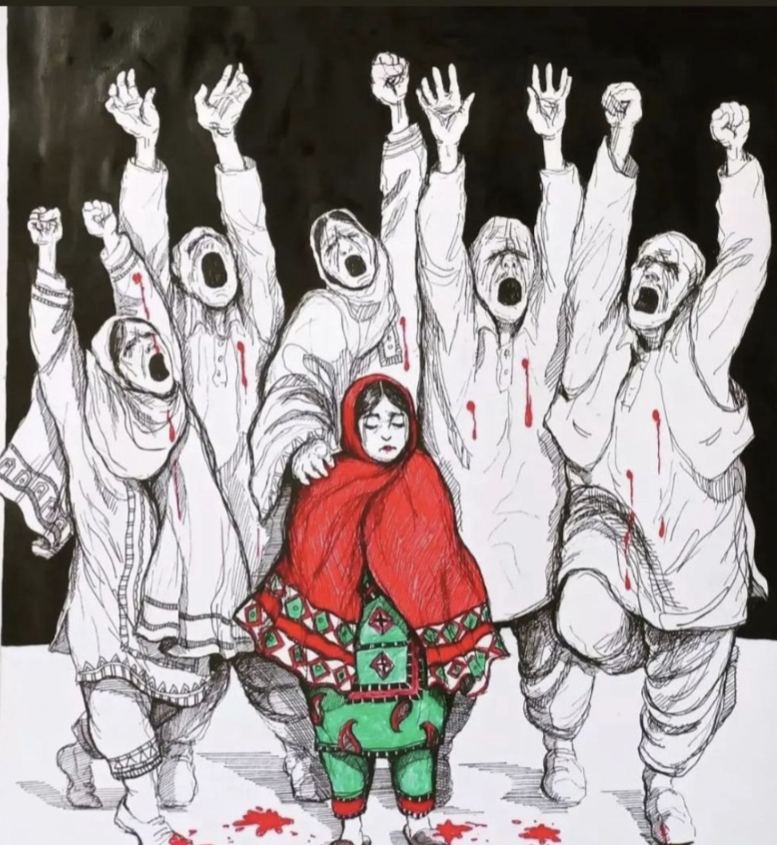 This article is written by Desgoharan and first published on thevoiceofbaluchwomen Instagram page in Farsi.

This is not an analytical essay. It is being written in the middle of flames of resentment and blood on a quivering land. It is not yet clear where the struggle between superior forces-state/religion/tribe- and inferior oppressed stratifications will lead. The hard outer shell doesn’t hesitate anything to maintain the status quo and suppress the rage of women and subordinated youth. The upcoming days are decisive days and contain relentless but unorganized struggle of various socially excluded stratifications, particularly women, with the old structures; a dynamic struggle, which has always been manifested in the form of daily resistance and was often ignored but is getting a clear shape today so that it can no longer be denied.

Chabahari girl manifests the underlying conflicts of Baluchistan society at once and in its plainest form. Suddenly, the community lost its patience and erupted. We remember that while the whole country was in rage due to the murder of Mahsa Amini, Baluchistani cyberspaces were agitated by allegations that a high-ranking police officer in Chabahar raped a young teenage female inhabitant of a village close to the city. The alleged news was spreading in social media; the judiciary and police forces didn’t see any need for clarification and transparency. The officer, accused of rape, was from the same repressive state apparatus, which never feels obliged to answer for its crimes, insults, and humiliations in Baluchistan and considers it as its inalienable right. Meanwhile, a Baluch activist, known in Baluchistan cyberspaces, publicly followed up on the case, while some other activists were secretly trying to fact-check it through their local networks. While the official media kept silent, this civil activist revealed the issue and made it public. But shortly after, he got threatened, forced to keep silent, and finally arrested.

In a community, which has always been known for its silence in the face of rape cases, this level of follow-up by independent social activists and their positioning toward the issue was an unprecedented experience. The common image of the Balouch community has always been “this is Baluchistan. The tribe will decide on these issues. The rape victim is likely to get killed, and the whole issue will end up as in previous cases, like in 2017, when more than four girls were raped in Iranshahr.” But this time the community didn’t bear in silence. Something cracked in Baluchistan. Their understanding of discrimination, suffering, and their right to self-determination has been changed. This change is mostly manifested in the litigation of the Chabahari girl.

At first, the clergy kept a “meaningful” silence and called on people to calm down. Members of parliament and official parties active in Baluchistan chose absolute silence, and no voice was raised from the influential figures of the Balouchi tribes. The ruling Shiite central state apparatus adopted the same approach toward the disaster; an approach which, of course, has become a “normal” and frequent approach in Baluchistan. A brief review of structural and historical discriminations in the region might help to understand the central government’s approach toward the case of the Chabahari girl.

For years, the central Shiite government has excluded Baluchistan from development and justice-oriented governmental programs through structural discrimination and disenfranchisement. For years, it has killed the hope for a better life and dehumanized the community with its centralized hegemonic system. Through this system, Balochi men are portrayed as violent, uncivilized, and primitive, while Balochi women are introduced as oppressed and powerless figures. A few people from upper social stratifications, connected to sources of central power, collaborating with the ruling class and supporting its interests, have been able to rise above this situation by getting financial and social promotions. Widespread impoverishment, high rates of illiteracy, unemployment, and being without identity papers such as birth certificates in Baluchistan are not hidden anymore. Balochs are a forgotten nation and the increasing number of execution cases in the region without any transparent, justice-based court within the last two years kills any hope for demanding justice for other crimes committed in the region.

But despite this painful history and systematic elimination, the massacre of the protestors on Bloody Friday of Zahedan, who were empty-handed, revealed the oppression and discrimination against the Baloch nation more than ever to other people of Iran. The central government, which has always used polarization and pitting the interests of non-Baloch natives against the Baloch to advance its scenarios, has not been able to attract popular support. The armed groups that were active in the border areas of Baluchistan had been weakened by both Pakistan and the Taliban, and the government could not defend the claim of “armed Baloch people” again. On that bloody Friday, the Balochs had nothing but sticks and stones in their hands against the barrage of machine guns, as evidenced by countless videos that were published after this bloody day.

These events caused the people of other regions, especially the ethnic minorities and nations all over Iran, to sympathize with the Balochs and express their solidarity with the Balochs in their protests and gatherings. These changes and sympathies promise new days; the days that warn the government that it should be afraid of the changing society of Baluchistan.

Although, in the meantime, the Sunni clergy led by Abdul Hamid Ismail Zahi, who tried to institutionalize the oppression of women for years, and to maintain their base by fighting and bargaining with the government and clans, still thought that they could lead Baluchs. This institution, even after they were discredited among the women and activists of Baluchistan after supporting the Taliban and Raisi’s presidency, did not expect to face this form of disobedience.

Among the wide array of Sunni imams in Baluchistan, only one was willing to listen to the story of Chabahari’s family before the street protests and speak from the official platform about the oppression that the family experienced. But the people of Chabahar spontaneously came to the street and gathered without the support of traditional authorities to protest. This rally, which continued until late at night, eventually led to the arrest of several people, including several Baloch women, some of whom are still in prison. Even three days after this gathering, that is Bloody Friday of Zahedan, people did not keep silent and rebelled against Maulvi Abdul Hamid’s wishes. A very high number of protesters were reportedly shot dead. Many of them did not even have birth certificates, some had records of drug abuse and had been tortured in provincial prisons. They came from marginal areas like Shirabad; it is not an exaggeration to say that this neighborhood is one of the poorest and most deprived areas in the peripheral regions of Iran.

The events after that Bloody Friday shows that some clerics tried to quell the public anger caused by their silence by making statements supporting the protesters. This shows how people could threaten the leadership of the clerics, while discrediting the scenarios of the repression apparatus without the support of an external authority.

The Sunni clergy was not the only institution whose authority was shaken. The clan, as another authority in the traditional society of Baluchistan, lost its credibility to a large extent in these events. The clan, which used to have a chieftaincy (Khwanin) in Baluchistan, lost its influence to a great extent after the revolution with the spread of Islamism when many of its chieftains fled from Iran. This old institution could be outdated by the implementation of any justice-oriented and democratic programs. However, in the absence of such programs for human development in Sistan and Baluchistan and due to criminalizing any form of civil, social, and independent political activities, once again, it returned to the stage of political equations. Using widespread and absolute poverty, the Islamic Republic employed and militarised the clan system. This policy has been used to control the borders and subjugate the Baluchi dissident and specially oppressed Baluchi women specifically in the past decade. This time, in the case of the Chabahari girl, the clans once again destroyed the hope of pleading for justice and left the Balochi people alone.

All of these forces, including the central government, and the clerical body of Sunnis and tribes, have not yet been able to provide an answer to the oppression that was inflicted on the Chabahari girl and the Baloch community. These days, representatives of the government are traveling to Sistan and Baluchistan to negotiate or make deals with scholars, trustees, and elders. The old forces come together to put an end to the crisis. However, the Balochis, who came to the street empty-handed, invalidated these deals. Now Balochi women have also joined the protest movement. In remote villages, teenage girls tear up photos of leaders of the Islamic Republic in schools, make statements and write slogans on walls. The society of Sistan and Baluchistan is shedding its skin. What we witnessed in the case of the Chabahari girl and Zahedan’s Bloody Friday indicates a great change in the lower layers of society.

Chabahari girl showed us that as much as the reactionary forces mobilized in front of our cries for Janin, Zand, Ajoyi (woman, life, freedom), we, Balochi people, have changed and we are building new ways to move forward more than ever.

The struggles of miners in Iran: part 1