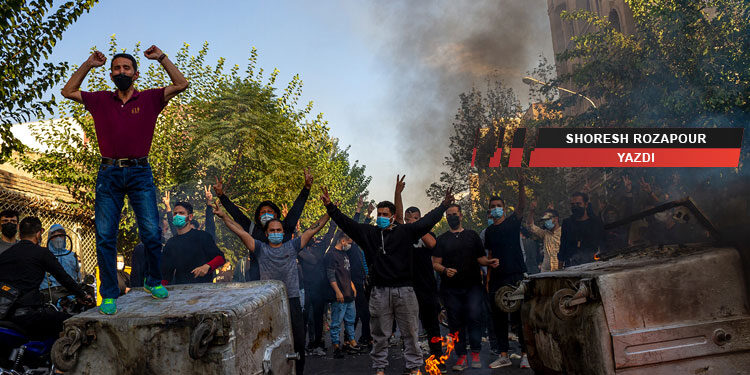 This article is written by Shoresh Rozapour and was first published here in Turkish.

Emerging since September 17th, the Jina uprising has been able to sustain itself by paving the way for new collective struggles at many points. This uprising, which created solidarity among oppressed national minorities, was able to bring together many social groups under the leadership of women. Workers, laborers, shopkeepers, and the impoverished middle class seriously participated in the protests and organized strikes. High school and university students also took part in this struggle, further radicalizing the process. The popular uprising and resistance are now about to fill the third month despite all the retreats and pressures, and during these three months, it has shown its different potentials and contradictions to a certain extent.

It seems that the biggest problem of the uprising, despite all its newly developed solidarity and inspirational aspects, is generally related to disorganization. This problem could impose an increasingly grueling process on the uprising. Workers, shopkeepers, and high school-university students took part in the strike waves from the beginning of the protests and ensured the continuation of the uprising. Protestors on the streets and the neighborhoods resisted in different ways against the various security forces of the state during all these days. Women took off their headscarves and danced wherever they gathered and set the headscarves on fire, and female students embraced this movement by bleaching their hair in schools. Despite all these brave actions, calls for strikes and general strikes did not often come to fruition. This was related to the problem of the lack of organization of the uprising as a whole.

Since different classes and social groups tried to come together in this popular uprising, the ideology or organizational imagination of a certain class did not dominate. Complex action plans were realized as everyone expected everyone else to participate in protests and strikes. The spontaneous emergence of the uprising has not transformed into a more organized stage. In addition, the development of the protests has not been homogenous across the country. For example, the demonstrations and massacres in Kurdistan and Balochistan differed from Tehran and other central cities in terms of their quantitative and qualitative dimensions. In any case, as a result of these resistances, more than 400 protesters were killed and according to some sources, 20-60 thousand people were arrested. Major massacres were committed in the provinces of Balochistan, Mazandaran, and Kurdistan, and protesters have condemned these atrocities in other cities of the country and showed solidarity by saying “Jin, Jiyan, Azadi”, the Kurdish version of “women, life, freedom” for almost three months.

On the other hand, the Islamic Republic continued its policy of denial and oppression against these protests from the very first day, as usual. From the very beginning state discourse divided the ‘real protester’ from the ‘egteşaşgar’ (provocateur). In the eyes of the state, the ‘real protesters’ are those who do not shout anti-regime slogans, who are not vandals, and who leave the street immediately. But the protesters who risk staying on the street resisting against security forces are now only portrayed as provocateurs by the regime. The next step came from presenting the protesters as ‘spies’, ‘falsifiers’, and ‘terrorists’. By connecting these protests and protesters to the opposition and foreign powers abroad, the Iranian regime declared opposition media outlets such as Iran International, BBC Persian, and similar organizations as the actors behind these events and stated that they are in a hybrid ‘cognitive war’ with them. In this direction, news bulletins on Iranian national channels and state-led newspapers constantly made this propaganda and showed the events to the pro-regime forces from their own perspective. However, massacres, shootings with real bullets, murdered children, unlawful arrests and judicial processes, torture, forced confessions in front of the camera, physical violence, harassment and rape during detention and in prisons, and death sentences have made the Iranian regime the main enemy to be defeated in the eyes of the Iranian people.

Recently, the first protester of this rebellion, Mohsen Shakeri, who was sentenced to death after being accused of “waging war against God” and subsequently executed, made a big impact in Iran and around the world. Unfortunately, the tradition of giving the death penalty to dissidents became more systematic during the Islamic Republic and was used against various ‘criminals’ with different excuses. In 1988 alone, in what became known as the Black Summer, at least 5,000 leftist political prisoners were executed in prisons on the basis of Khomeini’s fatwa. The memory of the 1980s has remained alive in Iranian society. The bourgeois mullah regime is also aware of this.

At a meeting with the administrators of the judicial system on June 28, 2022, before this uprising, Iranian Supreme Leader Ali Khamenei pointed out that the Islamic Republic was able to survive through the 1980s, and said: “This divine tradition can be repeated in every period and we should know that the god of 2022 is the same god of 1980.” Although these words were said before the uprising, they can adequately describe the developments in the last three months. The Islamic Republic has once again been sternly invoking the ‘god of 1980’. However, the popular uprising, which tries to take revolutionary steps from time to time, somehow continues to pull its head out of the ground like the mole of history. So, even if this revolt ends now, it can flare up again at any time. The open violence of the state caused great reactions in society and these reactions came together and made the uprising alive. Tossing Turbans Of mullahs by many ordinary people is an indication of how much the foundation of the Islamic Republic has been shaken. As this revolt really causes a great social awakening, it triggers different social groups every day and can widen the ranks of the protesters. However, as it still lacks enough organization to take on a revolutionary force, it remains in the stage of the permanent uprising. Perhaps more time is needed to resolve this contradiction. For example, the new neighborhood committees that emerged during the uprising, although small in scale, have the potential to bring people together during the revolt and can play a role as part of a collective struggle by organizing people for the next stages. Moreover, neighborhood committees also offer a solution to the communication problem and connect protesters through face-to-face contacts, murals, and leaflet distribution in times of internet outage.

The last point is about how the Jina Uprising was used by the right-wing opposition of the Iranian regime. The toppled Shah’s son, Reza Pahlavi is the leader of the mainstream right-wing opposition. The monarchists have been in exile since 1979, mostly in the USA. All the mainstream media outlets have somehow propagated them for 43 years. On the other hand, the People’s Mujahideen Organization, a formerly left-based but conservative Islamist organization, represented the other wing of the opposition. Together with the uprising, these two currents came to the stage of lobbying again with western countries and established their plans for a different ‘government in exile’, and an ‘interim government’ after a possible regime change. However, the effort of this opposition to show itself as a leader did not receive a response from the Iranian people. To give an example, neither the Monarchists’ nor the MEK’s calls turned into a gathering or protest in Iran. In addition, the emergence of new figures in the right-wing opposition has narrowed the space for the so-called main opposition leaders, such as Reza Pahlavi and Maryam Rojavi, who have been touted for years.

Other Iranian right-wing opposition figures have gained notoriety at the international level in recent years, and especially in recent months, we have come across individuals who present themselves to western states as the ‘spokesperson’, ‘organizers’, or ‘leaders’ of the Iranian insurgency. In this context, Masih Alinejad, Hamed Esmaeilion, and Nazanin Boniadi are the new faces of the right-wing opposition to the Iranian regime. Masih Alinejad has found the courage to introduce herself as the ‘spokesperson’ of Iranian women and the ‘leader’ of the ongoing uprising, due to the campaigns launched in recent years against compulsory veiling. In this direction, Alinejad met with Emanuel Macron in November 2022 and announced that “during my visit with Emmanuel Macron, I told him that what is happening in Iran is a revolution. France can be the first country to recognize this revolution officially. France must meet the Iranian opposition instead of regime officials and prepare the EU for a secular Iran”.

Hamed Esmaeilion has become an influential political figure as the person who founded The Association of Victims’ Families after the shooting down of Flight PS752, a Ukrainian passenger plane in 2020, by the IRGC that killed all 176 passengers. Esmaeilion, the president and spokesperson of the Victims’ Families Association, called for action by dissident Iranians abroad during the Jina Uprising, and was able to carry out the most massive and widespread global actions that the opponents of the Iranian regime could not manage in 43 years. These actions took place against the Islamic Republic in more than 150 cities around the world. Esmaeilion held a demonstration in Berlin on October 22 inviting Iranians in Europe to be the voice of the protesters in Iran. The number of protesters is estimated at 80,000 to 100,000. Therefore, for some Iranians and some western states, Esmaeilion represents the most appropriate figure of opposition to the Iranian regime. He also represents more modern values compared to the Iranian monarchists which makes him a more appropriate candidate. He recently attended the Halifax international security forum 2022 together with Masih Alinejad.

Another figure is Nazanin Boniadi, an Iranian-British actress and activist who worked as a spokesperson for Amnesty International from 2009-2015 and a board member of the Iranian Center for Human Rights from 2015-2021. After the recent uprising began, Boniadi called on foreign states to assist the protesters in September 2022. She met with Kamala Harris on October 14, 2022, following the protests in Iran. She also attended an informal session of the United Nations Security Council in November 2022 as Iran’s representative. After that, some activists in the Iranian opposition began to see her as Iran’s future prime minister.

The Iranian regime’s right-wing opposition abroad has been engaged in a constant effort of seizure, in the guise of aid to the uprising, and this is not a new development. However, this time, the international community’s attention to the protests has opened up a field of new relations, lobbying opportunities, and attempts to take a stake in events for the right-wing opposition. Since the leftist opposition abroad did not organize a significant reaction, the pro-imperialist right opposition has found room to seize ownership of the uprising. This is another danger facing the Jina uprising and shows how lonely it really is. The masses of people and progressive actors taking action against the Iranian regime have to oppose not only the Islamic Republic but also all right-wing opposition and imperialist states in this struggle, because if they cannot do this, this uprising and the emerging revolution, which they continue at the cost of their lives, may be sacrificed at the hands of the right-wing political forces abroad with the help of the imperialist states.

Life that resists death, the people of Iran rise up!

The Revolt of Hunger